Higher education in Tripura had a late start. Maharaja Bir Bikram (MBB) College, the first degree college in the State, started functioning under the University of Calcutta only in 1947. Not that there was no attempt in the past in Princely Tripura to establish any higher educational institution. As early as 1901, Radhakishore Manikya made an attempt to establish a degree college in the-then tiny capital town Agartala; but as the proposal did not fulfill the necessary requirements, it did not get approval from the Calcutta University. In 1937, Bir Bikramkishore Manikya, the last Maharaja of Tripura, had planned for establishing a college again at Agartala and an area of 254 acres of land, consisting of undulated tilla land having interposed lakes almost all around, in the eastern part of Agartala, was earmarked for that under the “Vidyapattan Scheme”. A committee under the name “Vidyapattan Governing Committee” consisting of 10 members with the Minister as its President was appointed by the Maharaja to carry out the scheme of higher education and a sum of Rs. 50,000 was placed at its disposal at the first instance. On 7 May, 1937, Maharaja Bir Bikram laid the foundation-stone of the college under the scheme. But with the outbreak of the Second World War (1939-45), the work of construction had to be abandoned. The vulnerability of Tripura became apparent after the fall of Burma to the Japanese in 1942. The ground floor of the unfinished College building was converted into an Army Hospital for British Army moving to and from Burma. When the Second World War was over, the construction work could not be started immediately due to certain difficulties and on 17 May, 1947, Maharaja Bir Bikram breathed his last and Tripura became restive for various reasons. As a result, the entire scheme of “Vidyapattan” could not be implemented into reality in time. The MBB College (popularly known as the “Dream College”), affiliated to the Calcutta University, was once the only college in the state. 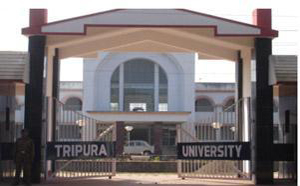 As time progressed, to meet the growing demands of a large number of students – who after the partition of the country had migrated to Tripura from the erstwhile East Pakistan (now Bangladesh)—some other colleges came into being at private initiatives,e.g.Ramkrishna Mahavidyalaya at Kailasahar in 1950; Belonia College at Belonia in 1964; Ramthakur College at Agartala in 1967 – and all were affiliated to the Calcutta University. That showed the urge of the people for higher education because, compared to the national average, along with the growth of population in the state, the literacy rate of Tripura was also higher since independence despite economic backwardness of the common people. As the students and people of the state were pressing hard for quite sometime since the seventies of the last century to uplift the existing three private degree Colleges of state into government colleges; in 1982 the three private degree colleges of Tripura were taken over by the state government, in spite of its limited means. Thus all the degree colleges in Tripura became ultimately government colleges at that time. 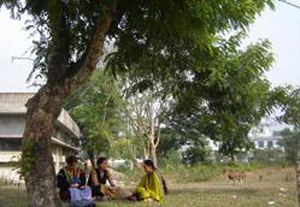 However, due to the geographic isolation (the partition of the country debarred Tripura from using the traditional communication routes by road or rail on the other sides of the border) and the distance from the University of Calcutta, it was virtually not possible on the part of a large number of poor students of Tripura to continue further studies after graduation. Hence, in the late sixties and early seventies of the last century, there were big students’ movements in Tripura with the demand for a University in the State. To meet the growing popular demands, a plan to upgrade MBB College into a Post Graduate College was first initiated. With a view to achieving that goal, post graduate classes in three subjects – History, Economics and Mathematics – were also started in the MBB College. But the idea of upgrading MBB College into a Post Graduate College or University did not materialize. Rather, Tripura was sanctioned by the UGC in 1976 a post-graduate wing of the Calcutta University, named Calcutta University Post graduate Centre (CUPGC), and thus the demand for having a full fledged University in the state remained unfulfilled. For a decade, the CUPGC, housed in different scattered government old buildings at College Tilla, Agartala, functioned as the highest centre of learning in the state with many limitations. However, despite severe financial constraints, a new campus was selected by the government for the CUPGC in a green 75 acres semi-urban setting on the National Highway at Suryamaninagar, about 10 kms south of the capital city Agartala. With an aim of having a forthcoming University in that setting in the near future, the foundation-stone was laid at Suryamaninagar campus on 18 December, 1985 by Dasaratha Deb, the the legendary leader of the historic Janasiksha (People’s Education) movement and the-then Deputy Chief Minister – cum Education Minister of Tripura.

The Tripura University Act envisages that the objective of the University shall not only be “to disseminate and advance knowledge by providing instructional and research facilities” in the state in areas of contemporary relevance to the society and the country (with the motto “pursuit of excellence”) but to make special provisions for studies in tribal life and culture and to introduce vocational subjects with a view to provide employment opportunities to the students. The Act specifically enjoins the University to organisz specialized diploma, degree and post-graduate courses in certain subjects. Keeping that spirit of the Act in consideration, Tripura University started its journey in 1987.

There are also a large number of colleges affiliated to the university. The number of affiliated Colleges at present is 52 among which there are 27 General Degree Colleges, 19 Professional Degree Colleges, 2 Technical Colleges and 4 Polytechnic Institutes.The University is running various courses under Science and Arts & Commerce Faculty.A total number of 41 Doctoral Programmes (Ph.D.), 60 Postgraduate Programmes (P.G), 6 Postgraduate Diploma Programmes and 7 Undergraduate Programmes (U.G) are running in Tripura University. Despite several odds at its inception, the University has been trying to overcome various difficulties with the cooperation of the State Government, the UGC, the MHRD, the NEC and the Planning Commission of India and many other authorities. The autonomous character of the University is not interfered in any way by the State Government. The relationship between the State Government and the University is very cordial and the former, despite severe economic constraints, encourages the latter to formulate new ideas of development in the larger interest of the State, particularly for the cause of the tribal and backward people. Tripura University has been converted to a Central University w.e.f 2nd July,2007 under the Tripura University Act,2006 as enacted by the Parliament.

Designed and Developed by Dataflow System